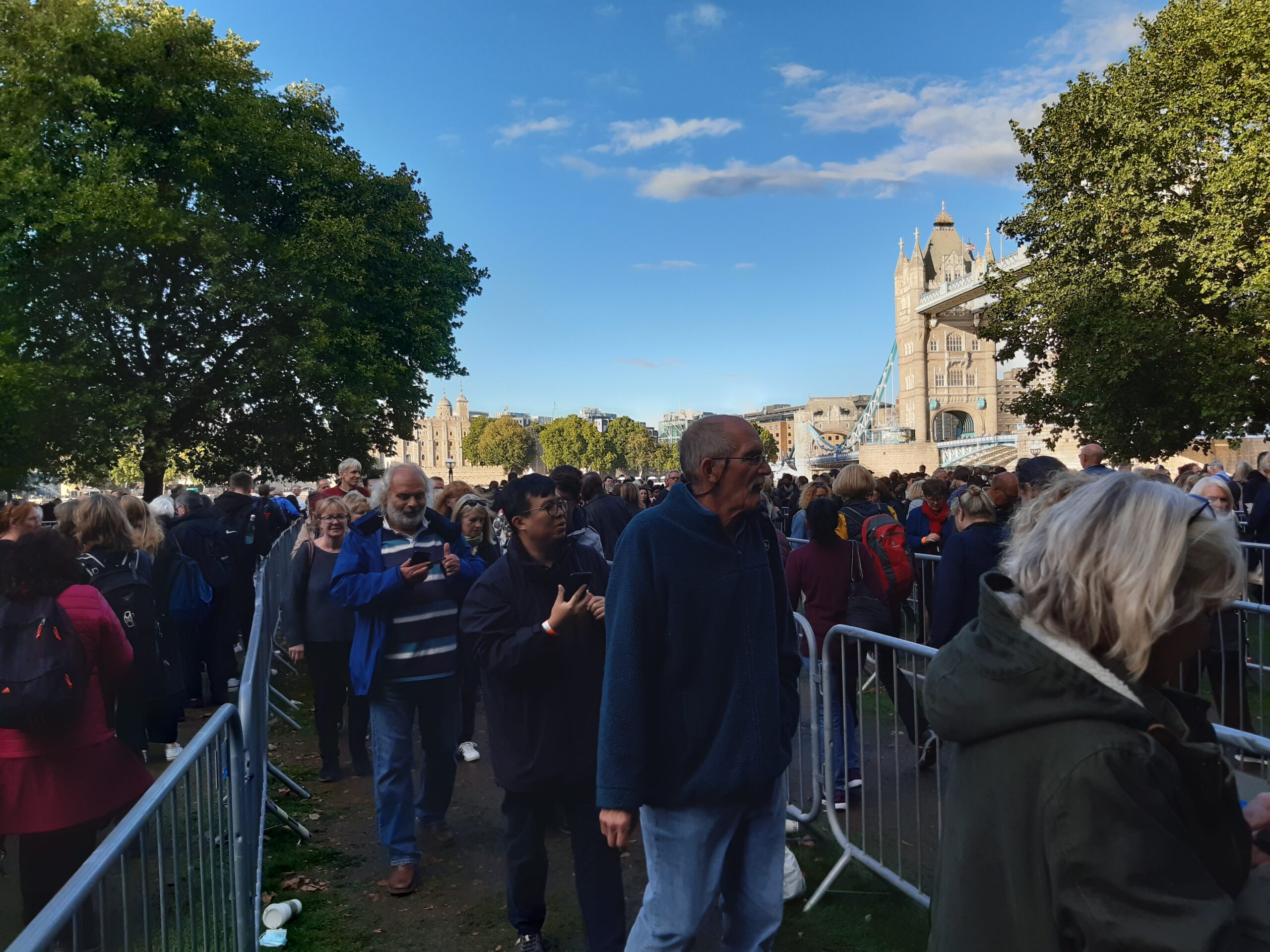 I read in the paper on the day of the Queen’s funeral that the last lady allowed into the Palace of Westminster to view her lying in State was actually completing her second lap. She had viewed the Queen many hours before and was so dismayed that the moment passed so quickly, that she doubled back and rejoined the queue so she could view her once again. While I now completely understand how she felt, and I’m in awe of her stamina, I can’t help believing that there is more to it than the need to have a second viewing.

I’ll give you my crazy timings. I joined the queue in Southwark Park just after 11.00 am on the Friday morning. That picture was taken at Tower Bridge at 17.30, just after we received our wristbands that signified, we were now in the queue proper. So, yes, I spent over six hours queueing to get in The Queue. And I eventually entered The Palace of Westminster at 01.20 Saturday morning. I know this because I was still compos mentis enough to check my watch as I walked in. And my head was a bit frazzled by this stage.

The stewards encouraged us to buddy-up as early as the switchbacks in Southwark Park. The strategy being, once we had our wristbands, we could shuttle off to sit down and eat or drink or whatever and rejoin our buddies by keeping in touch by phone. That way we wouldn’t lose our place. So theoretically you could leave the queue for, well hours, if you were of a mind to do that, and rejoin a couple of miles along. No one in my gang did that, and I didn’t see anyone in the immediate vicinity reappearing after a long absence.

The queue was the place to be. Sure, we nipped off to get coffees and snacks, and toilet breaks, but we all wanted to rejoin the queue sooner rather than later. Naturally there was the fear of being accused of pushing in. A heinous crime on the day. But in the main I think most people just wanted to get back among their gang. Just imagine thousands of people with a shared purpose all striving to achieve their goal and through a recently built mutual bond, helping those around them to achieve theirs. If this sounds like some Brigadoonian bliss, please bear in mind that stop-start queueing for hours on end takes its toll on your bones. Think this was where the mutual help side of things really kicked in. I fueled myself with Nurofen Super Plus Plus and protein bars and trust me I was creaking towards the end.

Naturally there was banter. I think we’d made it as far as the HMS Belfast when one of the guys said he’d just read somewhere that this queue could be seen from space. Wow! I did laugh at that and told him that was a first for me for sure. My new pal Tom took great pleasure in pointing out approaching bridges after I had made the hugely inaccurate statement that after we passed Blackfriars, the next one would be Westminster, a sign we were approaching the end. ‘Oh yeah…Waterloo. Yes, I forgot about that one.’ And it was dark, and we were both going through a tired phase when the Hungerford and Golden Jubilee Bridges reared their heads. I think we both just started giggling like idiots at that point. I blame the Nurofen. Yes, and my American friend Sandy, who had a few years on me, and showed no signs of quitting. I loved talking to her. Out of badness I might have mentioned Trump. Her subsequent thoughts on him occupied us for a good half hour. When she calmed down, I suggested that what a sadly divided America needed right now was…well, something like this, which they obviously couldn’t have because they don’t have a monarchy, do they. Not sure that helped.

When Big Ben and the Houses of Parliament did eventually hove into view, I confessed to my gang that it just left me feeling a bit sad. The end was in sight…and I wasn’t sure I wanted it all to end.

Of course, when we did eventually arrive at Westminster Bridge that wasn’t our crossing point. We were diverted down the pathway running by the side of St Thomas’ Hospital, the one with the Covid Memorial Wall, which in the pitch black became an obstacle course, eventually allowing us to cross the river by way of Lambeth Bridge.

After that it was free coffee and more protein snacks and a set of switchbacks that went on forever, followed by the security process, and with our heads suitable scrambled we were led to the entrance of the Palace of Westminster.

Here we were guided to the steps that led down to the coffin by ladies and gents who, well for me, appeared to resemble silent, smiling, helpful elite killers. Don’t know how accurate that description is. Don’t think I want to know.

So, you must have seen the interior of that hall in photos over the last week, and as a vision, photos do it justice. Sort of. There was little movement, other than the line of people slowly passing the coffin. The guards stood motionless, bizarrely motionless in truth. You don’t get the atmosphere though with photos. The atmosphere inside was all silence, and electricity, and calm, and other worldliness, and sadness, and order…and definitely wonder. And all at once. As I walked down the steps, I felt a bit of an intruder…like I’d just got a free pass into a super massive serious moment in history. We are talking Queens and Kings here. Once I was in position I bowed my head, closed my eyes and did my best to gather my thoughts together so I could silently say what I imagine was fairly similar to what most people silently said. And then, in a heartbeat, I was on the pavement outside. I shook hands with and hugged those in my inner gang. Yes, it was all pretty emotional. And yes, this is the point where I do understand the lady who rejoined the queue. My bones just wouldn’t have allowed me to if I had wanted to.

And then we all went home.

That Saturday afternoon I posted a Tweet asking why people would eBay their wristbands. I still stand by that. Mine is currently wrapped around the top of a mannequin in the corner of my living room. The acronym LISQ – Lying in State Queen, facing outwards.

I think it’s the most valuable thing I possess.

4 thoughts on “The Queue”