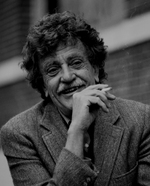 The next time (probably sometime today) you get the distinct impression that every utility company, supermarket, petrol station, bank (obviously), car parking space etc, is currently operating with the sole priority of grabbing every last penny you have and leaving you destitute, you may want to consider how Kurt Vonnegut envisaged everything falling apart:

‘Persons with anything life sustaining to sell, fellow citizens as well as foreigners, were refusing to exchange their goods for money. They were suddenly saying to people with nothing but paper representations of wealth, ‘Wake up you idiots! Whatever made you think paper was so valuable?’

‘There was still plenty of food and fuel and so on for all the human beings on the planet, as numerous as they had become, but millions upon millions of them were starting to starve to death now.’

‘And this famine…it was all in people’s heads. People had simply changed their opinions of paper wealth, but, for all practical purposes, the planet might as well have been knocked out of orbit by a meteor the size of Luxembourg.’

Taken from the novel ‘Galapagos’ by Kurt Vonnegut. Published 1985.