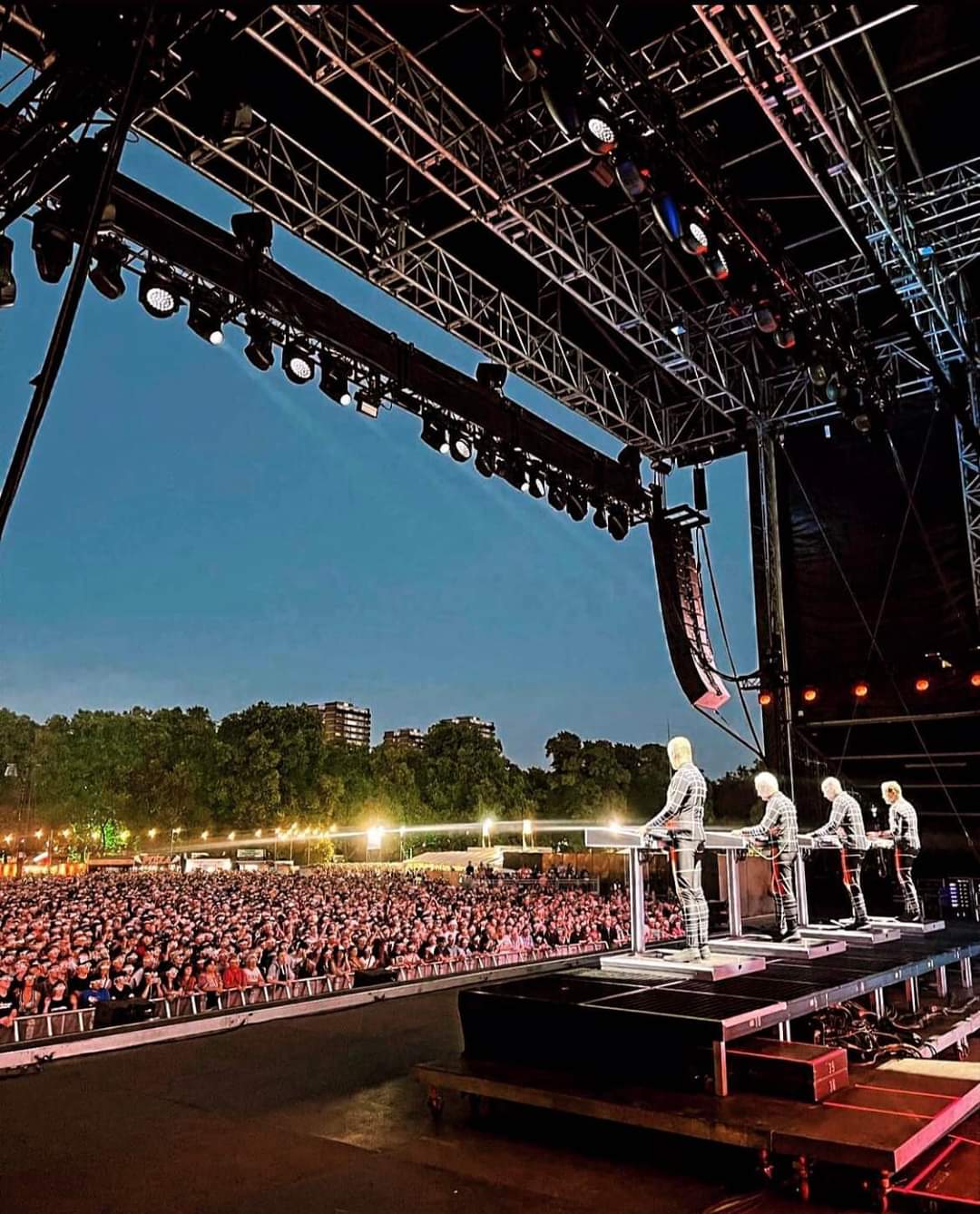 Should have done this before the Nick Cave one really. Ah well…probably doesn’t matter.

It feels like Kraftwerk have been around all my life. Slight exaggeration, but they have been going for ever such a long time. Well, they’re robots, what do you expect. Ha ha. I’ve always thought they were great. Just about everyone who ever plugged in an instrument other than a guitar, can claim them as an influence. And their minimalist stage set-up means aging doesn’t matter. They’ve had members leave. One at least has died. It doesn’t detract from their ‘live’ presence one bit. It’s just four guys standing more or less motionless behind four identical keyboard consoles. And it looks amazing! They supplement their act with film shows above and behind them…but more of that later.

That Saturday at All Points East was called ‘Field Day’ and the music during the day was largely ‘techno’. I have no problem with Techno, but I wasn’t about to go Dad-dancing in any of the various DJ arenas. Baz and I set ourselves down in one of the various bench seating areas in the park. The one by the 6Music stage as it goes. And that was us more or less, up until Kraftwerk came on. Baz is always entertaining and good company, and it was just great fun to be amongst it all. And folk would perch themselves at our table from time to time, in-between events. All very friendly.

Around seven forty-five in the evening was Kraftwerk time, so it was time to get in position. I guess we were about halfway in by the time they came on. The crowd were a bit fidgety. There did seem to be a lot of people insisting on moving about, which I could have done without, but that’s festivals I guess.

Right…so…the 3D bit. Just before they started there was a guy coming around dishing out these cardboard specs, similar to the ones you get in the cinema when you’ve wasted your money upgrading on a movie, that looks perfectly fine on a normal screen. However, they were worth wearing for this lot. The song ‘Spacelab’ had a film of…well, a flying saucer kind of affair, and it did indeed feel at one point as if it was going to land on your head. The sun was going down as they launched into ‘The Man Machine’ and ‘Autobahn’. I mean, this stuff is fantastic. Films showing in the background. These four virtually motionless guys decked out in their circuit board garb, creating this fabulous music. For me, they’re music Royalty. And that’s good Royalty, not the type who shuffle off to some phony Disneyland when the going gets tough.

‘The Model’ got a big cheer, as it would. If I had a fave moment, it was probably the ‘Tour de France segment, but I always loved all that anyway. And on they played, with all these trains, computers and whathaveyou, coming at us, all 3D’d up. They ended with ‘Music Non-Stop’ and with their one concession to conventional theatricality, gradually exiting, with a bow to the crowd, one by one. To huge applause naturally.

And then we all crossed the park to see The Chemical Brothers. Why can’t everything always be like that?