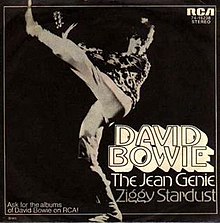 You know when a dog suddenly sits upright when it hears a loud clap of thunder. That was me when this first came on the radio one morning. I probably had the dog’s startled look too. I was about five minutes awake. I hadn’t even started thinking about the day at school at that point. Thirteen year olds don’t think far ahead as a rule. Getting through the day unscathed was as far as it went, well, for me it was. And this song came on like a punch in the face. Right from Mick Ronson’s guitar attack at the start, this song sounded like it wanted a fight. Even Bowie’s left in mumblings before the chorus sounded threatening. I had never heard anything like this.

So, bit of background. Mum had bought me Beatles singles and ep’s when I was a kid. I liked them but I didn’t really understand what it was all about at that age. I thought the Beatles were in charge of the country. In fairness to my five year old self, they were always in pictures with Harold Wilson, or they seemed to me to be. I suppose I really started listening to music properly in 1970, and that was the top 30 show on Radio 1. Seem to remember ‘Riders on the Storm’ and ‘Up around the Bend’ caught my ear, which looking back I’m quite proud of my young self for. I listened to the radio a lot. Before school. After school unless I was out somewhere with kids from the neighbourhood. Pop music, or rock-n-roll, or whatever it was, was great. We all had our favourites. The T.Rex gang. The Slade gang. And so on. I was more Slade incidentally. And of course there was Bowie. Everybody knew Ziggy Stardust. The cool kids were already getting teachers muttering about their Bowie mullet hairstyles. Boys, and girls naturally.

And of course I liked Bowie, but this song really upped the game. Of course after a few hearings it becomes familiar. Verse/chorus/verse and repeat. And yes it did sound suspiciously similar to ‘Blockbuster’. That happens with all music doesn’t it. The familiarity I mean. If you listen to say ‘Bohemian Rhapsody’ now your head is going ‘Ah yes. Opera bit. Galileo Galileo. Rocky bit. etc etc.’ But when you first hear it, you have no idea what’s coming. It’s a stream of sounds, and you either want to hear it again and again or you don’t. Simple as. The Jean Genie sounded so wierd, and threatening, and utterly astonishing on first hearing, that I couldn’t hear it again soon enough. Hell, even Bowie’s harmonica sounded alien.

I always preferred Aladdin Sane to Ziggy after that even though this song didn’t sound as good on the album for some reason. Didn’t matter. I had the single. That was well spent pocket money. I think music developed from something I definitely liked, to a near on obsession after that. That guitar racket at the start. I honestly can still remember how shocked I was hearing it that first time when I listen to it now. As they say, music can do that. That’s why it’s the best.