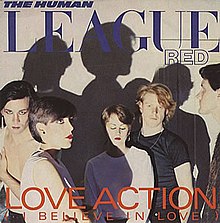 In 1979 I was flat sharing in this place Winton, a suburb of Bournemouth. One of the girls living there had this album ‘Reproduction’ by the Human League. I’d never heard of them. I didn’t like the cover (the band hated it apparently) and I thought the music was awful. That’s the Human League done with then. And I forgot about them.

in ’81 a few of us embarked on one of those European travelling things that some young people do as a kind of rite-of-passage ritual. In fairness, there wasn’t much travelling. Most of the time was spent working on various archaeological sites in Chartres. That was Ok though. I met some good people there and I got to the point where I could sort of communicate in French. We had some wild times there, however music was limited. French radio wasn’t very good as I remember. We missed ‘Ghost Town’ and the summer of discontent and all that. ‘Start Me Up’ was their new song so they’d play that. That was something I guess.

I came back to England around November I think, and headed to my home town Dunstable for a brief stay (41 years later, still here). I’d been home a few days and I arranged to meet my mate from school, Pete, one Saturday lunchtime, in the Saracens Head on the High Street. Fortunately the Saracens was in the process of becoming the best pub on the planet at that time, so all the omens were good. I think we were playing pool when this song came on the juke box. The bouncing synth riff had me immediately, before the big synths, drums and vocals kick in. It had the drive. It had the chorus. That song had everything. ‘WhoTF is this Pete?’ I asked.

‘Human League mate.’ Well they’d got better hadn’t they. The song had come out in the summer apparently. Another one we’d missed.

There was a lot of fuss about the ‘Dare’ album, which was a massive seller. The purists hated that it was all electronic…even the drums. Thing was, bands like Kraftwerk had been making ‘electronic’ music since the 70’s. But they were ‘niche’ weren’t they, so it was OK. Same with tunes like ‘I feel Love’ and ‘Heart Of Glass’. Two electro-disco bangers designed to get the girls away from dancing round their handbags and get mental on the dancefloor. They were great, of course they were, but maybe they were like ‘one-offs’ and they wouldn’t disturb the status quo. ‘Love Action’ sounded seamless though. This was just obviously how music was going to sound from now on and there was nothing anybody could do about it even if they wanted to. I think that’s what got to the purists the most. Things were changing and it was ship up or ship out.

I didn’t give a toss incidentally. It was a brilliant song. I was back in England, and England was a cool place to be in 1981!