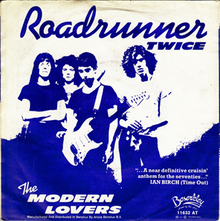 Memory can play tricks on you, and the timeline for this song is one such case. Wikipedia tells me it wasn’t released until 1976 having been recorded in April 1972. And I’m sure I used to listen to it on Stuart Henry’s Saturday morning show (yes him again), but the BBC got rid of him in 1974. So all I can think is he must have got hold of a moody early copy, because he played it every week without fail. So I would have first heard it when I was thirteen or so, and I absolutely loathed it. I just couldn’t see the point. The singer couldn’t sing…like really couldn’t sing. The tune was non-existent. There was no fancy guitar break in the middle. And it seemed to go on forever. Stuart Henry loved it naturally, and I liked his show, so I’d suffer this song every week for the sake of the other stuff he’d play. And I would continue to listen to it, probably for over a year, and it never got any better.

Fast forward a few years to, presumably 1976, and I’m in Woollies in the High Street, flicking through their records, and there it is: Roadrunner – Jonathan Richman. The whole history I had with this record came flooding back. I mean, this probably had been my number one hatiest song ever. So obviously I bought it. And when I got home I couldn’t stop playing it. It was all different now. The chugging repetitive beat was hypnotic. The stripped back anti-arrangement worked perfectly. His vocals were perfect for the song. And the band were tight. What a tune! And you could sort of move about to it. Trust me, the stuff I’d been listening to over the last couple of years didn’t encourage you to move. And I’d had enough of that. It was time for a re-set, and Roadrunner was provided the trigger.

A few months later I was watching the TV show ‘Supersonic’. The gimmick here was the presenter played like the musical director. It was all ‘and cue Suzi Quatro’ etc etc. OK, so in this show he goes ‘and cue The Damned’ and we move to the stage where the band are playing a suitably wild adrenalin rush rendition of ‘Neat Neat Neat’. And when the song ends we cut back to the studio where everyone is just sitting in shocked silence at what they’ve just seen. Yes, probably staged, but it did add to the moment.

That’s the point I remember as the start of the change in music. Things were reverting back to basics and thanks to ‘Roadrunner’ that suited me just fine.