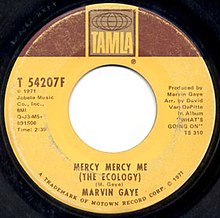 Saturday morning radio for a few years in the early ’70’s was Stuart Henry. I was never totally sure about him. He had an odd way, like he’d suddenly start waffling on about someone like Jefferson Airplane for no tangible reason, sounding like some strung out ’60’s casualty lying on a beanbag in the studio. He did play some tunes though and he was a definite improvement on that goon Ed ‘Stewpot’ Stewart whose show preceded his. And he had his weekly ecology spot (yes kids, the world was going down the tubes in the 70’s too) at around 11.30. This song was his theme song to this segment. Well it’s subtitle was ‘The Ecology’.

Right…ok, I don’t think I’m being too controversial here in saying that England wasn’t particularly racially integrated at this time. Not like it is now for sure. And the music definitely wasn’t. Black music, to us early ‘teens, was soul. It was a genre. Like ‘prog’, and ‘heavy’, and ‘glam’ etc. Soul was one of these. Sorry guys, reggae didn’t really hit our school properly until Bob Marley. And the only ‘soul’ you got was on the radio or on TOTP, which seemed to be stuff like The Four Tops or Gladys Knight and the Pips, and I didn’t like them much. I know this sounds ludicrous now: black music a genre. But from the viewpoint of a nieve teenager in the early 70’s it really was like that. Once again this was pre Bob Marley. Rap music was a way away yet. Beyonce??? Rock Against Racism only came at the end of the decade.

This record didn’t sound like The Four Tops though. It didn’t sound like anything on Earth to me. It had this weird rhythm pulse that sounded like the sound the submarine made in ‘Voyage To The Bottom Of The Sea’, and the voice, or multi-tracked voices, were like an instrument in themselves. And he sounded like he really cared, as opposed to the other genres whose vocalists were, well they sang the lyrics in their distinctive style and that’s it really. I guess the sounding like it mattered bit was, well that was the ‘soul’ wasn’t it.

Of course, if you bothered to listen, there was a whole world of ‘black’ music, and there had been for years. Stevie Wonder made his finest music in the ’70’s. And Sly and the Family Stone weren’t to shabby either. Oh, and Jimi Hendrix…and Otis Redding and…it goes on. It’s embarrassing to write this now, and thank you Marvin Gaye for opening my eyes, ears and mind.

The album ‘What’s Going On’ now occupies a significant place in music history, and modern American history. It’s an astonishing record, but I still prefer to listen to this song separately. It still sounds to me like it’s arrived from outer space. Or God. Or…something. Still don’t know.