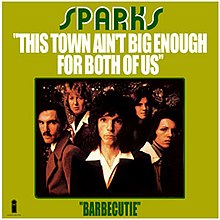 2. This Town Ain’t Big Enough for Both of Us. Sparks

If you grew up in the early ’70’s, you couldn’t really get away from Westerns on the TV. ‘Butch Cassidy and The Sundance Kid’ had a lot to answer for. However that was good. A lot of the other movies weren’t so good. Cowboys are great. Native Americans (Indians) are bad. Wow, what an education. Thanks for that Hollywood. The TV shows were probably better. ‘The High Chaparral’, ‘The Virginian’, ‘Alias(not Alas) Smith and Jones’. Even ‘Bonanza’ was still showing I think. Lot of Westerns.

So when a song comes on the radio with a guy singing in this ridiculous falsetto voice, building up to the cowboy clincher: ‘This Town Ain’t Big Enough for Both of Us’ followed by the sound of a cowboy gunshot, well, they have your attention don’t they. These boys knew what they were doing. The whole thing was absurd of course, but it was a great song, don’t forget that.

It sold well, so they got to appear on Top of the Pops. People sometimes say Bowie was shocking when he first appeared on the tele. I don’t remember it like that. Ok, he had some pretty wild get-ups and he did act up, particularly with his guitarist Mick Ronson, but he always made sure he looked lovely, so he was accepted. These two clowns didn’t give a damn about looking lovely. Brother Russell on vocals sported the Marc Bolan/Kevin Keegan perm, with the ridiculous voice obviously. He was normal I suppose, well sort of. But then you had other brother Ron on keyboards. He looked like…well he looked like Hitler didn’t he. And when he smiled…Mum shrieked when he tried to smile. She used to like watching TOTP with me, and obviously I’d announced I like Sparks when they were being introduced. I don’t think she’d ever seen anything as weird on the TV before. I certainly hadn’t. And there was some weird stuff on the TV in the ’70’s.

And then the phone calls. Mum would be talking to aunties, friends, neighbours etc. Same pattern every time. ‘Did you see them? Thursday evening? When he tried to smile? Well…I’ve never seen anything like it. Yes, I know.’ And followed by a resigned, ‘Yes. Ian seems to like them.’ And Mum loved music, and was pretty broad minded. She picked up on ‘Heart of Gold’ before I did. In fairness everyone’s reaction was much the same. Sparks had arrived, and they were the numero uno weirdo’s on the planet. Again, great song though.

Possibly the weirdest thing about Sparks is they continued to make music, and if you watch their recent excellent documentary, continue to do so up to this day. No millions of dollars squandered on hedonistic excess. They just turn up for work every day at the same time and get on with it. About as un rock-n-roll as you can get. And they’ve come back into popularity now haven’t they. Of course they have. Just older versions of the same thing. Nice life. Yeah, you could argue that song was a massive help to giving them that life. But it wasn’t the song was it…